This volume compares Paul’s letters to the Discourses of Epictetus and Philodemus’ works, On Death, and On Peity, in order to better situate Paul among the Greco-Roman writers.  It begins by showing how other attempts to situate Paul’s letters have a number of problems in the methods used, and challenges the typical genre system of literature classification.  The social status of Paul, Epictetus and Philodemus are indicated and criteria are established for categorizing literature according to how the texts intersect with society.  Twenty elements are selected to guage this relationship.  This volume combines concerns from literary theory, media studies, literary sociology, and linguistic anthropology to achieve its aims.

This volume views the works of Epictetus and Philodemus as closer to Paul’s letters than those selected previously for comparison by other scholars.  Both are closer to Paul’s educational status and social status, and have a more similar social purpose than other writers examined.  This volume is not concerned with Paul’s theological purpose, nor his theological content, but excels at classifying Paul’s letters with regard to the intersections evident between author and text, and text and audience.  Paul is portrayed in this volume as explaining abstract claims and defending those claims before an audience that occupied the same socio-literary sphere as the audiences for Epictetus and Philodemus.  Those abstract claims are most likely related to Paul’s theological purpose.

This volume challenges the classification system of Greco-Roman litertuare in general, and the placement of the Pauline letters in particular within that system.  This volume also provides tools with which to analyze writings associated with Paul, where authorship has often been disputed.   Regardless of where one stands on the authorship of 2 Timothy, or Hebrews, these criteria are useful to analyzing issues of authorship.  This volume also provides nuances for understanding Paul’s purpose for his letters.  The claims within this volume are worthy of engagement by Classicists, Biblical Scholars, and Theologians alike.

My Views on Commentary Usage for Sermon Preparation:

Why use commentaries?  The point of using commentaries is to create dialogue after one has examined the Greek, Hebrew, or Aramaic text. Two dangers are present here, not using commentaries at all, and using them too soon.  If one uses commentaries before examining the text in the original language, it is like showing up at a conversation with nothing to say. The corrective for this danger, is to have questions to ask from one’s study and observations one has made to contribute prior to the “discussion.” If one examines the text and skips referencing the commentaries, then one is no longer in any kind of discussion, but rather a monologue. The corrective to the second danger is to realize that those voices are already there waiting for discussion.  Ignoring them usually means that one is not interested in a healthy dialogue, or an evaluation of one’s monologue.

What commentaries should one use?  I tend to have a favorite single commentary (not the whole series) for each biblical book I am working with, and I keep at least one other strong voice on hand for study – preferably from a differing theological tradition than the main one I like. I try to familiarize myself with many commentaries on each book in order to know which ones are stronger – that is they handle the known interpretive issues.  Weak commentaries are those that either do not address the known issues, or do not evaluate the efforts of other scholars who have addressed them.

How does one understand Commentaries?  One thing that can help a pastor with using commentaries is to know why different commentators say some of the things they say. In other words, being able to answer the question, “How did that commentator arrive at that conclusion?” The main way to be able to answer this is to know the original biblical languages well, to know how languages work – linguistics, to know how to draw inferences from that knowledge, and to widely read commentaries.  To get the most out of commentaries, one should be familiar with a method of exegesis that is broadly used by others.  All too often the reason pastors do not gain what they should out of commentaries is that either they are not proficient in the biblical languages or they are unacquainted with the process of exegesis.  The corrective here is to learn the biblical languages and learn a proper biblical exegesis method.  Although some commentators make their approach to exegesis explicit, others do not. For example, when I read ICC or most exegetical commentaries, it is easy to see how that commentator uses grammar and vocabulary from the original languages to yield conclusions. In an English-language-only commentary (or any modern language for that matter), this process still occurs but the process is “hidden” from the casual reader’s view within the text of the commentary. Usually this is done with the marketing strategy to sell a commentary to laymen or to the pastor who is unfamiliar with the languages. This might make the commentary more readable and “sell”-able, but often less useful to explaining the text. The problem with English-only commentaries is that the exegesis process is hidden, so the result is that the reader often concludes that the arguments are being carried by the weight of the person who wrote them or the publisher who printed them, rather than by how language functions. This provides an unsound basis for making a point. If a pastor is familiar enough with the process of exegesis – the one used by exegetical commentaries – then the point made will rest on the force of how language functions rather than on who made the point.

How does one use various types of commentaries?  The two main questions to ask concerning the passage are, “What does this passage say?” and “What should I do because of this passage?” (The “I” can become “We” or “You” for the congregation.)  Commentaries usually only answer one of these two questions well.  Most preachers I have heard over the course of my life have done a better job with answering the second question – at least that is where their emphasis was in the sermon. The potential problem with an approach that is weighted too heavily on the application side, is that unless the first question is answered well, the second question can only be answered partially at best, and even worse is often irrelevant to the text.

Some commentaries are specifically designed to inform either preaching or application. These often help to answer the second question, “What should I do because of this passage,” or they might help in creating the form of the message. However, these commentaries should not be used in isolation from those which answer the first question, “What does this passage say?”  A pastor wanting to prepare a good sermon uses at least two commentaries that answer the first question well, and at least one that answers the second question well, along with any homiletical method preferred.

The pastor needs to know how to answer that first question well, and then be familiar with how other scholars answer that question through the various commentaries.  This does at least two things.  It enables the pastor to bring out of the text what is inside for the congregation with the result that they are exposed to God’s message.  It also enables the pastor to see the issues underlying certain texts where scholars are in disagreement with the result that the pastor cautiously uses the text in light of those issues.

The next commentary in the Baker Exegetical Commentary on the New Testament series is out.  This 2-volume set has 2150 pages of exegetical analysis of Luke’s Gospel.

Bock provides readers with an in-depth treatment of the text of Luke that is not likely to be surpassed.  This series produces a amazing number of high-quality commentaries and this 2-volume set will appeal to many.

It is technical, providing serious academic discussions of issues in the text, yet its readability is accessible for the student and pastor.

I own all of the commentaries in this series that have been produced and am always excited to see the next ones arrive. 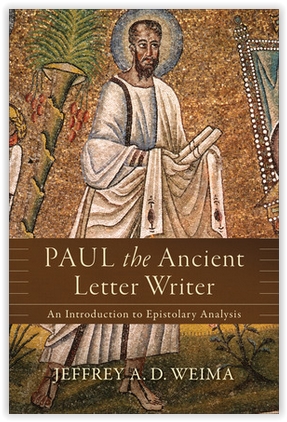 This rewarding volume just came out this month from Baker Academic.  In this volume, Weima analyzes the Pauline letters and interprets through the typical form and style elements that ancient writers were known to use.  This volume illustrates that Paul was an expert writer, who left clues to his purpose in the form and style elements of each letter.

A volume such as this should be referenced as part of the exegesis of any Pauline letter.

This is a text widget. The Text Widget allows you to add text or HTML to your sidebar. You can use a text widget to display text, links, images, HTML, or a combination of these. Edit them in the Widget section of the Customizer.